Antifa, Economism, and the Social Revolution

In What Is To Be Done? (1902), Lenin wrote that without an organized party to push demands further, the working class would never move beyond ‘economism’, that is the demand for purely economic betterment: higher wages, benefits, etc. These demand would leave the social and economic foundations of society intact.

Taken by themselves, these strikes were trade-union struggles, not yet social-democratic struggles. They marked the awakening antagonisms between workers and bosses; but the workers were not, and could not be, conscious of the irreconcilable antagonism of their interests to the whole of the modern political and social system.

An intact capitalism leads, as we know, to increased alienation, ever-worsening economic crises, and eventual collapse. In the meantime, capitalism remains based on inequality and exploitation supported by domination and oppression. Our understanding of social forces is not as black and white as Lenin’s; it includes different determinations alongside class: race, gender, sexuality, (dis)ability… but the fundamental antagonisms are economic. The others - racist, sexist, ableist, unfold out of the consequences of the commodity form and the drive for profits based on exploitation and domination. The racist, sexist, and xenophobic ultra-right is a product of the insecurity and violence of capitalism, and it is only by attacking the socio-economic causes of fascism that we can defeat fascism. The focus on “punching Nazis” as an end in itself seems to me to be the equivalent in 2017 of economism in the early 20th century.

The last few years have seen an awakening of a radical social-justice worldview, including movements coming out of Black Lives Matter, radical feminism, Pride, and disability activism. This has coalesced, in parts of the US at any rate, in a strong current of resistance of neoliberal policy, especially that attacking social services and environmental protection. But the neoliberal policies that have produced left-wing resistance have also produced the rise of a far-right emboldened by what they see as the victory of a new political class committed to the return to a capitalist golden age in which the “old stock” white male will regain his privilege over the rest of the world. The violence of “austerity” and hyper-exploitation have produced both an enlarged (if incoherent) left and an open far-right. Merely identifying the far-right as the focus of our anger and work leaves the real evil - the logic, structures, and policies of capitalism itself, to continue to operated without hindrance.

This has been apparent most clearly since last weekend when antifascists dispersed a white supremacist rally in Charlottesville, Virginia. The rise of openly racist, sexist, and fascist white supremacists in the States has given many people a target to fight against - a target the left has sorely needed. Punching Nazis is on the agenda, and while punching people isn’t my bag, it at least gives people on the the left the feeling that they are accomplishing something practical - something ostensibly “left wing” institutions (unions, the NDP, the Communist Party of Canada) have completely ignored for as long as I can remember.

Much of the impetus behind punching Nazis comes, I think, from a frustration with attempts (and I used the word advisedly) to argue with far-right fascists. They are experts at using the language and arguments of social justice against us, even when they are interesting in arguing at all, and not merely derailing argument. Punching Nazis carries the satisfaction of cutting through the sophistry and bullshit and seeing an immediate effect. But eventually we have to come to the realization that punching Nazis is not enough, just as arguing with them is not enough. In the end punching Nazis will seem just as tedious and pointless as arguing with them has been. We will need to continue to stand up against them, but we will feel like we aren’t getting anywhere.

Because the far-right is a consequence of capitaism, and not a thing in-and-of-itself, fighting and even vanquishing this round of fascists without overturning capitalism leaves the causes of fascism intact. The social inequality and economic crises of a capitalism hellbent on the commodification of everything, ever-increasing profits, and the forced adoption of the capitalist mode of production all over the globe (colonialism, imperialism).

Punching Nazis is satisfying and worthwhile, but it can never be enough.

Fighting fascism might result, in the end, in a temporary setback, perhaps even in a political revolution - transfer of power in the US government, for example. But it would leave existing social and economic relations untouched. Racism, sexism, all forms of oppression and domination would remain precisely because the fundamental oppression of economic exploitation remains. What is required instead is a social revolution, in which the very relations of social and economic relationships of society are completely overturned. 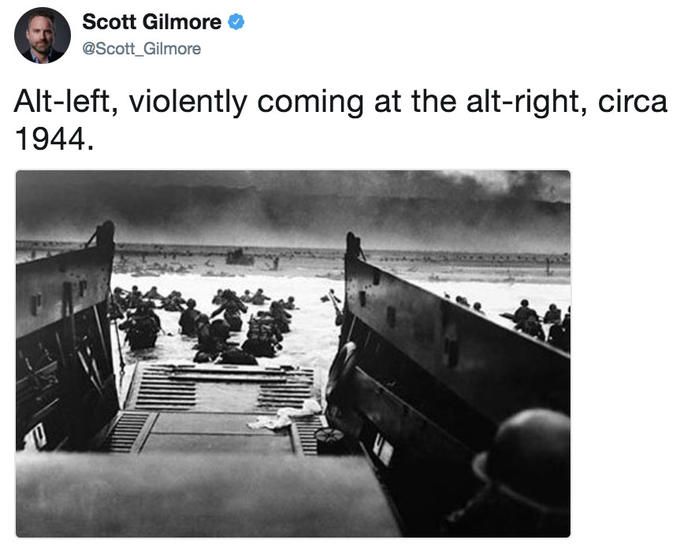 I think what I’m getting at is summed up in this meme. The image is perhaps satisfying in its attempt to get at the long history of left-wing antagonism towards the right (seen, for example, in the resistance of anarchist and communist forces against fascism in Italy and Spain). But it obscures, even violates, some vital historical realities. In the first place, the majority of German and American soldiers were not ideological supporters of the regimes they fought for, except in the sense of having been targets of propaganda and the general capitalist worldview gained through what Althusser called the “ideological state apparatuses”. They were neither alt-left nor alt-right. In addition, the clash of ideologies obscures the socio-economic of the Second World War. Like the First World War - indeed, part of a single historical process along with it - the Second World War was between competing capitalist powers for control over economic space. Hitler’s process of annexation and conquest was the move of an economic power blocked from colonial expansion by the terms of the Treaty of Versailles. The eventual “victors” of the Second World War (the United States) immediately expanded its imperial pretensions in a world suddenly free of (almost all) competing powers. To see the Second World War as a clash of fascist and liberal ideologies, with the liberals coming out victorious, is not only historically obtuse, but serves to further the interests of liberalism itself: the expansion of cqpitalist accumulation.

We need to be able to see beyond this kind of cynical manipulation. If you’re going to go punch Nazis, do it with your eyes open. It is not only the far-right that is used to co-opting the language and arguments of its opposite. Capitalism itself has proven itself to be expert at turning the energies and organizations of the left to its own advantage. The only way we can create a new and better world is by social revolution. Nazi punching is a milestone on that road, but we can’t stop there.