The Owl Problem: Composition and Abstraction

One of the complaints about programming tutorials is that they have the same problem as drawing tutorials, which John Fink refers to as “the owl problem”. 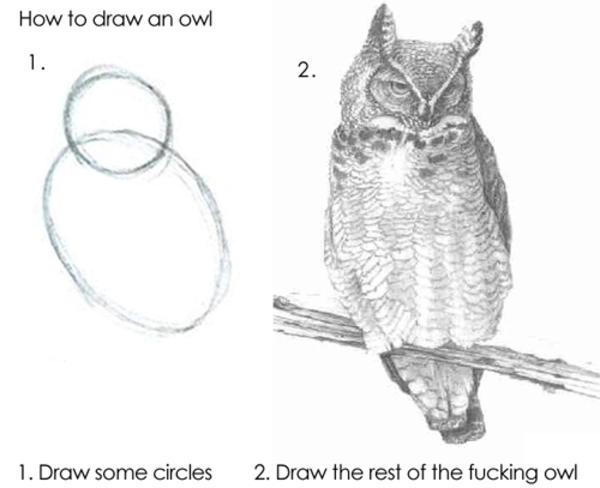 Essentially, the problem is that the tutorials give you a couple of simple, manageable steps, and then expect you to fill in the gaps between those and the finished project. The same problem exists in a lot of online instrument tutorials, and I’ve heard it discussed as a problem with expertise: “experts” skip over steps that they unconsciously know, so they aren’t necessarily good at explaining things. You want something explained by someone who isn’t an expert, someone for whom the missing steps still need to be consciously held in mind.

Anyway, I started thinking about the owl problem, and wondered if part of the problem isn’t thinking too big. When we decide to write a software application, we usually have the end result in mind, which might include all the functionality and use-cases (drawn, say, from user-stories) that can be gathered together. In Agile development, we aim for a “minimum viable product”, but this is still a functioning application worth showing to stakeholders. In other words, a minimum viable product is still an owl. With expert programmers this might not be much of a problem: they can fill in the blanks between a user-story and a finished feature, but in terms of learning to code, this way of thinking may not be the best way.

Over the last year or two I’ve gotten into functional programming with Clojure, which is a LISP. I’ve written before on how working with a LISP requires a different way of thinking about programming, especially if you’re coming from a procedural or object-oriented background. It occurred to me that some of the lessons I’ve learned from functional programming might be a way to help with the owl problem.

As SICP tells us, abstraction is one of the most powerful tools programmers use. The more abstract a procedure is, the more flexible, understandable, and reusable it is. In object-oriented programming, abstraction is one of the first concept you come across. OO tutorials often have you think about a concrete object, like a car. You know what components a car has, so you split the car up into multiple components (doors, wheels, windows, etc). You’re told not to worry about the implementation of the components right now - those implementations are hidden (encapsulated) and the component itself is an abstraction. So, you might start with the car (in this case, this is the owl), and you might break it down to components or features, but you put off the concrete implementation of each component. You put off actually writing implementation code until you have to (thus avoiding, for example, premature optimization).

(In procedural programming, at least when I was taking computer science courses, the method was again to start with a programme that was too big or too long and look for area where you could extract a function or method, encapsulating well-defined pieces of code. This is the opposite of starting from individual functions and building up.)

Functional programming starts from the other direction. Basically, the idea is not to worry about what your end result is going to be. Obviously you know you’re going to build a car or drawn an owl, but you don’t need to think about things at that level at first. Think about the concrete implementations of a feature. A door needs to open, so you write the code that opens a door. A wheel needs to rotate, so you write the code that rotates a wheel. Later on, when you have written a bunch of these pieces of code you can combine them into larger units of functionality (composition).

NOTE: I’m simplifying here for the argument. In fact the switch between different levels of abstraction and both the encapsulation/abstraction and composition of functions/methods happens all the time, and organically, while you’re working on a program. But again, this comes with a experience, for a beginner, it might be worth while thinking about encapsulation and composition as mutually exclusive.

To take an example: in the library world we have link resolvers. These basically take an incoming URL which contains some metadata, parses the URL to extract the metadata, queries a knowledge base, selects (or constructs) an outgoing URL and sends a user to a licensed resource.

Now, with the owl problem, we would be thinking about a minimum viable product that includes all of this functionality. In an OO tutorial, you might design the application with abstractions where those features should be, deferring their implementation. With FP, however, you might start at the bottom: given one URL, output a different URL. (In Clojure, one of the advantages to thinking in this way is that you’re always thinking about data and data transformations, rather than other kinds of functionality). You can write this fairly simply in Clojure:

But a function is just a piece of code that takes in a value and returns a value, meaning you can write functional code in, say, Ruby:

Now, obviously writing any one of these functions doesn’t give you the minimum viable product (owl), but you can work on these functions independently, making them as simple as possible, and then compose them into functions of higher-level functionality.

One benefit to this way of working is testability. Pure functions (functions with no side effects) are trivially easy to test: given a value a, produce value b. Even if you have to introduce a side effect, the side effect’s behaviour is kept distinct from the value transforming function, again making things easier to test.

So, from the perspective of dealing with the “owl problem” for beginning programmers, I think a functional approach has much to offer in terms of thinking about composition and abstraction. Once a lot of the mechanics of this way of coding are taken care of, then higher level components or features might become easier to design and write, leading to the capability of a novice programmer to tackle more object-oriented or procedural ways of coding.